MCG Covid-19 Redundancy and Retraining Bursary Fund was a resounding success, according to new report 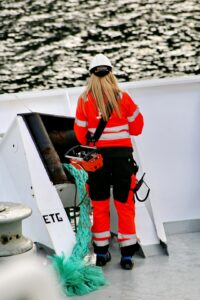 The report of the MCG Redundancy and Retraining Bursary Fund, published today, shows that in total 105 seafarers who lost work due to Covid-19 were granted help with the cost of training. At least half of them have secured another job in maritime.

Launched in November 2020 at the height of the Covid pandemic, the MCG bursary fund offered support to UK-based seafarers who had been made redundant or lost a contract and needed help towards the cost of training to stay in the industry. The scheme was funded by the Merchant Navy Welfare Board (MNWB), Trinity House and the Nautilus Slater Fund, and administered by the Marine Society on their behalf. It closed to applicants on 16th September.

In just under two years the MCG bursary fund awarded almost £48k to seafarers from all parts of the industry: the highest number of applications came from the offshore sector (28%) followed by ferries (23%) and deep sea (22%). The remainder were mostly in the cruise or yachts sector. More officers than ratings applied and most applicants were male, with only seven applications from female seafarers.

The courses they applied for were varied: half of all applicants needed funding to refresh their STCW qualifications, and about a third wanted to upskill their at-sea qualifications or gain jobs in a different sector of the industry such as off-shore wind and renewables. The age of applicants was fairly evenly spread with just over a quarter aged 25-34 and around a third aged 35-44. 17% were aged 55 or over and 10% were under 25.

“The MCG was set up over a decade ago to foster collaboration across the maritime welfare sector and this is an excellent example of just how we do that. It was a first for the MCG and we’re absolutely delighted with the outcome. Since November 2020 we’ve helped over 100 seafarers with funding for training to enable them to stay in the industry. They came in all shapes and sizes and from all parts of the industry – from ratings to officers, deck hands to engineers. Despite our best endeavours the one disappointment is that we only reached a small number of female seafarers.”

The scheme was due to close in March 2022 but was extended for a further six months in response to redundancies amongst staff at P&O Ferries. Cdr Hockley explained:

“When P&O Ferries staff were made redundant last Spring we responded immediately and reversed our decision to close. Since then, another 19 seafarers have received help from the MCG bursary. We were glad to be able to provide them with practical support during a period of such uncertainty.”

Feedback from seafarers who benefited from the fund has been overwhelmingly positive.

SK (Able Seafarer) said: “I received a bursary to assist with the funding of an AEC 1 course. As a result of having that qualification, I have gained work as a deckhand on a Crew Transfer Vessel. The bursary was a significant factor in being able to attend the course, without which it is difficult to obtain employment on workboats. I am extremely grateful for the funding I received.”

SD (First Officer) said: “I have been able to secure a job following my updated Proficiency in Medical Care course. I am very grateful for the bursary. I’ve been lucky enough to get a part time contract with Condor – rare in the shipping industry, but exactly what I was after as a single mum!”

Another successful applicant, AD (Second Engineer) praised the scheme, highlighting the need for more support like this for seafarer training. He put the money towards four STCW refresher courses, which enabled him to take on a new contract, as he explained:

“I have now completed my STCW refresher training that the Covid 19 bursary helped to fund. As a result of renewing my certificates, I secured a 6-week contract with the Northern Lighthouse Board with the potential of further work.”

“It’s hugely rewarding to see this fund make such a significant difference to seafarers up and down the country. Investing close to £50,000 over almost two years has ensured they have received the right training to secure necessary jobs after losing contracts or being subjected to redundancy. Without doubt, seafarers have had a really rough time. But, most importantly, 55% of applicants for this fund have been able to secure a new job which is fantastic and vitally important in the midst of an economic crisis.”

“That as many as 105 seafarers could benefit from the fund and regain their footing in the maritime sector is great news, even more so when set against the background of the unprecedented level of disruption caused by the COVID-19 pandemic.”

“The Redundancy and Retraining fund offered support at a time of great uncertainty by facilitating the reskilling of those severely impacted by COVID and latterly by P&O Ferries’ decision to terminate the employment of 786 seafarers. The fund kept more than a hundred seafarers available for work over a period of almost two years. It’s a shining example of swift cooperation delivering meaningful benefits for maritime professionals.”

You can read the report in full here