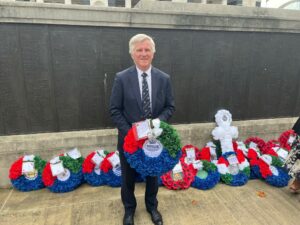 The chairman of a leading welfare charity has been recognised for his years of devoted service with the highest medal of honour within the maritime sector.

Captain Andrew Cassels has been awarded a Merchant Navy Medal for Meritorious Service to the Merchant Navy Welfare Board (MNWB), which is the umbrella charity for the UK Merchant Navy and fishing fleets that provides welfare services to merchant seafarers, fishermen and their dependants.

Capt. Cassels, from Berkhamsted, was among 14 mariners to receive the award on Merchant Navy Day.

“What a huge honour to be awarded the Merchant Navy Medal for Meritorious Service. It should also be said that this award also recognises the efforts of the fantastic team that runs the MNWB and guidance from our board of trustees who are drawn from shipowners, maritime unions and charities. As the umbrella charity for the sector, we have an immense ability to do good across the whole Merchant Navy and fishing sector.

“I have been involved in the shipping business for 47 years sailing both globally and around the UK. Wherever you sail you see seafarers, fishers and their families in desperate need of help. The MNWB, along with the maritime charity’s sector, provides much-needed support to Merchant Navy seafarers, fishers and their families, whether based in the UK or visiting our ports. This award very much feels like the pinnacle of my career.”

Capt. Cassels joined BP in 1975 where he served at sea for 14 years in ranks up to Master on BP oil tankers. After ‘coming ashore’, he enjoyed a broad range of roles across BP Shipping and BP Exploration ending his career as the Director of OCIMF, the Oil Companies International Marine Forum.

He also held directorships at East Asia Response Ltd (EARL), the Middle East Navigation Aids Service (MENAS), BP ShipCare Sdn Bhd and served on the Merchant Navy Training Board (MNTB). From 2011, he was a Council Member of the Merchant Navy Welfare Board before being appointed chairman in 2018.

During Capt. Cassels’ tenure as chairman, the Board has been at the forefront of responding to crises including Covid-19, the Ukraine/Russia conflict and the sacking of 800 seafarers by P&O Ferries amid a series of challenges the sector has faced.

“Every single nominee embodies the values of the maritime sector and has gone above and beyond within their field. We’re grateful to all 14 recipients for their efforts to make the industry better, safer and more accessible for all.”

Merchant Navy Medals have been awarded since 2016 for significant contributions to the maritime industry. Each year, seafarers are nominated by their colleagues, friends, and family for the medals.

The Merchant Navy Medal is silver medal and bears the Ian Rank-Broadley effigy of Her Majesty the Queen. The ribbon is made up of stripes of green, white and red.

The recipients will receive their medals at the Merchant Navy Medal ceremony at Trinity House in November where a member of the Royal family is traditionally present.

· Daniel James Cross, Services to the preservation of a historic ship

· Heather Natalie Enness, Services to training, promotion of the sector and diversity

· Ann Pletschke, Services to diversity and inclusion in maritime